skip to main | skip to sidebar

Happy Leap Day! (Unless You're in Debt)
This being February 29 — Leap Day — today is costing you an extra day's interest if you're repaying a debt. On the bright side, its earning you a tiny bit more on your bank deposits.
Whom do we have to thank — or curse — for this extra day every four years? Julius Caesar and his lover, Cleopatra.

In 48 B.C., Julius Caesar was in Alexandria, Egypt, absorbing the culture and science — and decadence — of Cleopatra's capital. There he learned from an old sage named Acoreus about Egypt's calendar, which had a leap year.

At the time, the Roman calendar did not. Like most ancient calendars, it was based on the phases of the moon, which in one cycle take about 29.5 days. But 12 months of 29.5 days doesn't equal the true length of the year as measured by the orbit of the Earth around the sun. It's off by 11 days, so anniversaries, holidays, and entire seasons to drift backward on lunar calendars.
The ancient Egyptians had realized this and created a calendar 365??-days long — with the fraction averaged in by adding an extra day every four years.
When Caesar returned to Rome, he created a 365-day calendar with a quadrennial leap year, adding the extra day in February.

A minor hassle for some, perhaps, but certainly better than the alternative faced by the Romans. Back in 45 B.C., for instance, their lunar calendar had drifted backward by 80 days — nearly three months. Spring had become winter, and autumn came in the summer months.
To correct, this Caesar decreed that 45 B.C. would be 445 days long. Think about the extra interest on 80 extra days! No wonder they called it "The Year of Confusion."

Yeah, I know we're in the middle of a false Spring, but days like this remind me of school.

Sitting out on the grass quad area in between classes with friends.
Driving around in my car with Journey playing on the cassette player with the windows down and your shades on.
Yelling out the window of the car to get the attention of the beautiful girls walking down the street.
Kissing my girlfriend out on the bleachers, innocent but yet so exciting.
The smell of the freshly cut soccer fields.
Being able to hang out outside during physical education.
The little dandelion parachutes floating in the air from being launched by the neighbors sprinklers.
Waking up to a warm sun coming into the window and the first birds of the season chirping.
Coming home to see my dad in his old rickety chair leaned up against the opened garage door frame reading his paper, drinking his coffee and enjoying his Camel.
and for some reason, the one that always gets me, is the orange sunset and the long shadows of us as I either played ball or wrenched on cars late into the evening with my friends who I grew up with.


What are some of your memories of spring?
Posted by MM at 9:44 AM 1 comment:

Labels: Hey there's a label spot, what should I put? Spring time memories 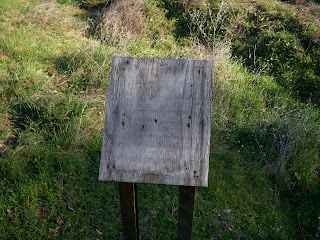 Of Ghosts, Lottery and Midgets

Today was a good day. It's B-Day+2 and the weather was a beautiful 65 degrees outside. I was contacted by a real estate agent yesterday to go look at places today. Said real estate agent was coming up from the flat lands to Podunk, and with all of the wisdom of the Google Maps, Yahoo! maps, and her Tom-Tom system in her car, she couldn't find the paved roads of Podunk, or more accurately, she found one of only a handful of dirt roads in the area. After successfully navigating the Real Estate Agent back onto the paved roads of Podunk, we set off to see the 2 houses that I wanted to see. 1 was a pretty nice place, had a little creek that ran through the front of the property, a nice terraced back yard, mature trees, and a generally good feeling throughout the house.

The second house was a totally different story. The house is nice, it's relatively large at 1800 sqft and no outwardly glaring problems with it, until you actually set foot inside the house. It was cold, ok that can be excused with it being Feb and it's been somewhat cold at night, but it was a cold that cut to the bone. MG and Mie told me shortly after going into the house that it felt like someone or something was watching them. Even though the only people in the house were the 3 of us and the R.E.A.. Everyone took a turn going down stairs and saying that the room down there felt "weird". I was in the garage and the only thing that I could think of while down there was that seeing as how there was no door except for the large garage door, that if there was a fire or something of that nature down there, that you'd be trapped. That's the second time that I've been to this house and it's the second time that I had that trapped feeling. I'm not claustrophobic or all that paranoid in everyday life, just in that house. So that one is a definite NOOoooooo! Come to find out from the R.E.A. that the house has been on the market 351 days, and has been in and fallen out of escrow at least 7 different times. It's an old town and there's bound to be ghosts in houses, real or imaginary, but this one is baaaaad juju..

We then went to lunch and generally poked around thinking and talking about the houses and what we would do with $150 Million. Of course everyone in our families would get a house, all the kids would get a full ride scholarship and a family business would be created to help people out who are in dire need of assistance. I was thinking a good thing would be to have something similar to the Habitat for Humanity, except take a bank owned piece of property which is in need of repair and take a family who is out on the streets and who is really in need of a place that they can feel safe or at least have a roof over their heads for their kids and themselves, then have them renovate the house so that they can have a place to live and gain skills that they can use in the real world. Or something of that nature...

Anyway, that led us to the local supermarket, where we picked up the parts to make dinner tonight, fish, rice, some nice mangoes and juices, we were done with out little excursion, so we got in line to check out. I started putting the stuff up onto the conveyor belt, and took little notice to the Little Person in front of me. She was there with her mom or her sugar momma, and had just helped her put the items from her cart onto the belt, after the guy rang up the last of the items, she turned and shot me one of the dirtiest looks I had ever received outside of marriage. She puffed up, showed me a bag with 1 head of cabbage in it and then turned to give it to the cashier. I'm not sure what I did to piss this little woman off, but if it was that bad, she could go get a step stool and kiss my butt. Who does she think she is puffing up on me? I had half a mind to have MG go kick her ass, but those of me who know me, know that I was thinking that this whole thing was just too funny, bordering on the surreal to do that.

So here's to the Ghosts of the houses we visit, the hopes of lotteries won and to the Spunky Midget with a bad attitude... Happy Sunday... :)
Posted by MM at 4:15 PM 5 comments:

This space intentionally left blank.
Posted by MM at 10:17 AM 5 comments:

Mie and I were talking last night, again about pretty much anything that our minds clasped onto in our Looney-verse. Last night was a little different, she told me about a little old lady she met at the market. This little old lady was perplexed by all the different types of pears that there were, and told Mie about having never tried anything but 1 kind.

That led, very dog legged, to what would your obituary say about you and the life you lead? I'm sure that the little old lady may have absolutely adored her husband, her family, her kids, grandkids and very possibly great grandkids, but what if the most adventurous thing that she did in her life was to try a new type of pear, would that lead to each of us saying "What a shame, she never really lived" or would we be saying "She lead a very long, fulfilled life"?

Are you living up to your potential? Are you doing all that your heart desires? Are you full of joy in your daily life? Are you fulfilled in your life? Very bluntly, are you happy? Not the smiling like a goon on the bus stop bench who looks like he needs to be put away, but are you truly happy? Do you feel good about what you've done, where you're life is going and do you look forward to tomorrow? Some might say "Well I'm not rich, I don't have the (fill in the blank)
Posted by MM at 2:37 PM 3 comments:

Luke, I am your personal trainer