skip to main | skip to sidebar

Summer of 2006 was a rather interesting time for me. I was single, learning how to deal with my wandering spirit without picking up and moving to the East coast. I've always lived near the ocean or another large body of water, except when I was in Denver or Phoenix. So it was only natural that I migrate towards the coast again for my own mental and emotional health, to center myself in certain ways. After watching the Hitchcock classic "The Birds" and realizing finally after having seen it for the umpteenth million time, that it was filmed in the cities of Bodega and Bodega Bay. It was a natural choice to start the centering of myself, so I picked up and headed to the coast. I did this for nearly 2 full months of weekends, it wasn't until probably the 3rd or 4th trip to the coast that I came across a little turn out that had a couple of cars in it.

I decided to stop to see what it was all about, it was a nice warm day with a light breeze coming from the sea, the salt in the air always a welcome scent. The grasses were golden, and the sun was near the horizon, but still allowed for an hour or so of day light. I found the dirt path that slowly turned into sand, on this path there was a stone monument with a brass plaque on it, with flowers, toys and all sort of gifts setting on and around it. I stopped to read and found out that this was a monument dedicated to Nicholas Green of Bodega Bay, for those of you who don't recognize his name, he was the 7 year old boy who was shot by highway robbers in Messina Italy, he died a couple days later from his injuries, and his parents Reg and Maggie decided to donate his organs. This was nearly unheard of in Italy at the time, and I remember how much of an impact this made to the people in Europe, especially to the 2 people who gained eyesight, and the 5 who gained a new lease on life, 4 of which were teenagers. The Italians were astounded that this family who had just lost their 7 year old son to robbers in their country and would be willing to donate his organs so that others might live, that the country opened it's heart to the family raising donations for the family.

In the wake of the events, the Greens have done a tremendous amount of work to raise awareness for organ donations, writing books and articles, made a video, gave interviews, answered letters and started a group called The Nicholas Green foundation . Today the foundation gives out their Nicholas Green Distinguished student award to 1 student from each state, they also award 1 Italian doctor a grant to come to the states to study the most advanced organ transplant techniques.

The plaque went on to tell of The Children's Bell Tower, the tower was built in 1995 by artist Bruce Hasson, this monument is about 18' tall, consists of 3 towers stacked on each other, and has 140 bells which were gathered from all over Italy, some of which are over 100 years old. These bells were donated from schools, churches, mines, ships, and some were even family keepsakes. There's even 1 cowbell. Some were forged specifically for this monument, the largest and most prominent being a 30" bell which was forged by the Marinelli foundry which has been forging Papal bells for nearly 1000 years now. Nicholas' name is on this bell, as well as the 7 people who received the transplants and Pope John Paul II blessed the bell before it was shipped to California.

This just absolutely blew me away when I saw it. The bells sing when the wind blows and you can hear them from the parking lot on a nice quiet day with the nice summer breeze blowing. This is a very powerful monument, it's amazing that one act of selfishness cowardice on the robbers part could lead to a moving experience for an entire country if not the whole world. So my question is this, who are the heroes? 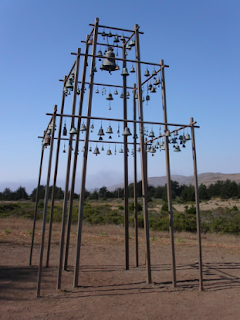 We postulated about the origins of these Upright Hairy Creatures, could they be part of some sort of genome splicing project testing? Creating some sort of super wolf that our government will use to hunt down people who they're looking for in wilderness areas? Some sort of super weapon which can communicate through speech and take orders like a soldier? These things have been seen through out the wilds of Wisconsin, not so much in Northern Illinois, I guess these Upright Hairy Creatures aren't that much into corn.

Then they covered UFOs and Ufologists (yes, that's an actual science). I was telling Mie that there is no such thing as UFOs, she asked how I came to that conclusion. I told her that since 1947 at the Roswell NM crash site, they were no longer Unidentified, that the powers that be now knew what they were and where they were from. So when the government tells you that there is no such thing as a UFO, they're telling you the truth. I do believe that there is intelligent life outside of our solar system. It would be kind of silly, in my opinion, to know for a fact that there are other Earth-class planets or for those Trekkie's out there M-class planets and there not be any intelligent life forms of one form or another. I have a friend of mine who even stated that if it's not an alien race, it could very well be us from the future coming back into time to tell us that we're fucking it up, stop fucking it up. That they're tired of dealing with the ramifications of the crap that we are doing to our planet right now. Which makes a certain amount of sense.

So whether it's Upright Hairy Creatures which look like wolves, apes or just plain old Sasquatches, or Aliens from another planet or another time, I don't think that we've discovered all there is to discover about this planet and all of it's fun little nooks and crannies.

In conclusion, we finished our night watching about real Fight Clubs, when she promptly turned to me and asked if I would be interested in something like that. It sounds interesting, but no... Something about being beaten with a 30 oz stick repeatedly sounds about as appealing as being woken up by someone beating me in the crotch with a toaster.
Posted by MM at 10:25 AM 2 comments:

I've been tagged (by Sybil sorry Mie)and cataloged, with any luck I'll be released back into the wild. So what am I suppose to do here? Go through each of the traits for my month? ok, let's see what I've got:

Loves reality and abstract. HAHAHA!! I live in the land of Denial, somewhere in the state of Confusion, on Tequila Gum drop lane.

Intelligent and clever, yes I am, but shhhh! Don't tell anyone, or my job as a computer janitor would be in jeopardy

Changing personality... What? Like a chameleon? OoOoooh, I can be like that guy on Pretender, I could be a doctor one day, then a race car driver the next day. That would be cool... :)

Attractive~ If I could do a smiley face with the screwed up concentration look, then I would. I would have to venture a guess and say that's a definite maybe, I mean, Mie puts up with me, so I can't be that horribly disfigured, which leads into the next question...

Sexy, I'm as sexy as anyone can be with a 3rd arm jutting out of the back of their head can be.. You should see how I can scratch the glutes... That's right Bay-by.

Quiet, shy and humble- Without a doubt, I have a hard time opening up and letting people in. (honest)

Honest and loyal-- Absolutely, without question. I would help any of my friends with what ever they need, except with the whole hiding the bodies, I can't do that... well maybe, if they really deserved it.

Determined to reach goals Well DUH!! You don't make it to co-assistant head janitorial engineer in training without being determined. But on a different note if you're passionate enough about something, when you hit a roadblock you will find a way to go through, over, under or around it, and yes there are plenty of goals which I would do any of those things to achieve them.

Loves freedom // yes... can't live with boundaries, well I can, but not for long.

Loves aggressiveness ~ There is a time and place for aggressiveness, like when some dork fish is trying to take the last Twinkies off of the store shelf, in that case that bastard is going down. Or when it comes to knowing what is the best course for something that is important to you and your family and putting it into play.

Too sensitive and easily hurt !~! I AM NOT!! WHO TOLD YOU THAT?!?! I HATE THEM.*sob*.. no not really, I don't get butt hurt about things too easily.

Gets angry really easily but does not show it. Only when MG is in the car do I hold back any sign of anger, other than that let the obscenities fly while driving and when I'm angry, you'll know it.

Loves making friends but rarely shows it. This I do agree with, I like meeting new people, I don't know how you show you like making friends though, so that part is a little confusing. : \

Daring and stubborn -0- Stubborn without any question, daring though is another thing, I can't think of anything more daring than driving through a blizzard in near white out conditions going down hill to work at 5 in the morning, but that's a daily thing lately. Maybe ordering puffer fish sushi made by a sushi apprentice, is that daring?

Ambitious. Yes, I want it all and will soon rule the world MUAHAHAHA!!!

Sharp, Dull as a crayon used by a 3 year old pressing down with all their might.

Superstitious and ludicrous... Spiritual, is that different then Superstitious? I don't do any of the "Step on a crack..." stuff, and the only thing ludicrous would be "Barf! Ludicrous Speed" 5 points for who ever tells me where that's from. :)

Spendthrift - Only when it comes to people I care about.

Luke, I am your personal trainer